Ravin R20 is one of the most sold crossbows by Ravin. The Ravin R series also won the crossbow of the year editor’s choice in 2019. If they weren’t good, then they wouldn’t get such a prestigious award.

A lot of you ask which one is better, Ravin R10 vs Ravin R20. For you guys, we also have a dedicated post to help you guys make the decision. We also reviewed the Ravin R10 in the past and spoiler alert, it got all green lights from us. 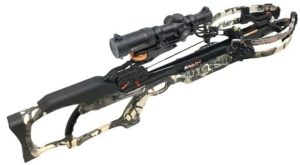 You are going to pay a premium price for the crossbow. You want a premium build.

The crossbow is built like a tank. HONESTLY, you won’t find any complaints about the build quality on the internet. Unless the unit was defective from the manufacturer, this is one of the best if not the best-built crossbow I tested.

The crossbow comes fully assembled. You can buy additional accessories if you want. But out of the box, the crossbow is pretty much ready to shoot. But don’t make the mistake of shooting it right out of the box. You need to calibrate the scope and make sure all the screws are tightened enough.

After adding all the accessories and the quiver, it should still weight less than 9 pounds. Considering other flagship crossbows, the Ravin R20 is one of the most lightweight crossbows on the market.

If you are looking for a crossbow that will get you running with minimal effort, this is the perfect option.

If you have seen the specification chart, you know that the crossbow can easily shoot up to 430fps with ease. When you load the crossbow with a bolt, the tension and creep feel like firing a rifle.

If you give this crossbow to a blindfolded riflescope shooter, unless he feels up the crossbow, he can’t tell the difference. It’s not just our words. You can find thousands of users saying it the same. The trigger of this crossbow is absolutely fine (more on that later).

With the included scope, you quickly go for hunts and do target shooting. But the added scope is not suitable for 430 FPS. If you want to get the best out of this crossbow, we suggest finding a better crossbow scope that can keep up with 400 FPS+ crossbows.

Unless you are in a windy area where the wind dictates the bolt’s direction, you can land all of your shots accurately with this crossbow. It’s best for both hunters and target shooters alike.

While it’s true that all shots won’t reach the 430 FPS mark, but our best shot reached 426 FPS, which is still pretty closer to the claim.

You will be surprised with any crossbow that shoots at 400 FPS. They are really fast. You won’t see the difference with the naked eye, but you will definitely feel the kinetic pressure.

The crossbow can pull 164 pounds of kinetic energy. And the draw weight is 12 lbs. It’s really well balanced. With the 34″ size, it may not be short. But it is still pretty maneuverable.

The Trac-trigger system is an excellent one. We have previously stated that this is one of the best trigger system we ever used. The statement is valid.

The trigger pull weight is around 2pounds, which is perfect for a crossbow. The tension and creep don’t overthrow the trigger. Overall, it’s one of the best triggers that we ever used. If you are planning to get the smaller brother the Ravin R10, don’t worry. They feature the same trigger.

The 164 kinetic energy with 12 lbs draws weight is no joke. The speed is more than enough for any kind of shooter.

Ravin says the scope is best for 100 yards range. DUE TO OUR TESTING, it was accurate up to 110+ yards. Don’t get me wrong; there is nothing wrong with the lens and coatings. It’s just underpowered compared to the crossbow. The only one reticle is kind of weird too.

The unique and advanced HeliCoil design of Ravin R20 reduces the noise and vibration. Giving you a stealthy crossbow that has virtually no vibration or noise.

If you have the money to spare, this is probably the best crossbow you can buy. If you want a crossbow with less weight and more compact, then the Ravin R10 is perfect for you.

FOR THE PRICE POINT, the Ravin R20 is quite unbeatable.