Every year a lot of people decide to join the crossbow scene, but when they look at the pricing they don’t pick up this beautiful weapon anymore. The main reason is the pricing. If you have looked at Ravin’s crossbows, some of them cost over $3000. There is no way a complete beginner will spend that much on a crossbow.

For them, I bring the boat in this endless sea. You don’t have to spend over $1000 on a crossbow if you don’t want to. You can get good crossbows at a cheaper price.

In this guide, I will show you guys some of the best crossbows under $600, which I think are the best. Of course, I will explain why I choose them and why you should do the same. Without further ado, let’s start.

CenterPoint Sniper 370 is one of the most sold crossbows from CenterPoint. It’s also the most sold and the best crossbow under 600. I am not exaggerating anything. This scope can easily give some of the $1000 crossbows a run for their money.

If you want to learn crossbow or want a crossbow for an upcoming hunting session, or target shooting this crossbow is suitable for all. The speed of this crossbow is quite high too. At 370 FPS you won’t miss any target that’s for sure.

When you buy the crossbow you will find a 4×32 crossbow scope inside the package. It’s a decent scope. By default, the marks are zeroed at 20, 30, 40, yards. You can and should modify it as you prefer.

The 18″ axle to axle width is quite small. Sniper 370 is lightweight, compact, and easy to carry in places where you only could imagine before.

There aren’t many cons attached to this crossbow. Besides the cocking mechanism and a bit of flimsy tactical stock. It’s without a doubt the best crossbow under $600 you can buy right now.

Excalibur Matrix GRZ 2 is another good mid-range crossbow. The speed of this crossbow is not that high. Matrix GRZ 2 can shoot bolts at 305 FPS.

Inside the packaging, you will find a Dead zone crossbow to aid you at shooting. Out of the box, you can just attach the crossbow, tighten the screws, and use it. But I recommend you to test the crossbow out, then zero the scope. After that go ham.

This is not a compact crossbow by any means. Even after cocking the crossbow width stays over 30″. Good thing, the durable material of the crossbow is quite lightweight. The whole crossbow weighs at 5.5 lbs. That’s not that high at all.

The only con that you will notice right off the bat is the cocking mechanism. It has a rope cocking mechanism, but the draw weight is quite high. If you don’t use a rope to aid you, you need to pull the string down at a 200lbs strength.

It’s a best crossbow under 600 dollars who just got into a crossbow. It’s not that fast, you can easily control the recoil and most importantly have fun. 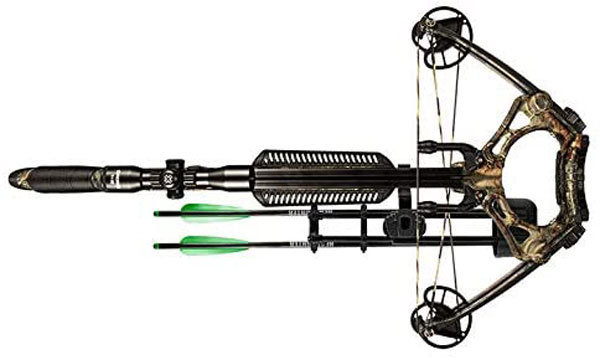 Barnett is a well-known and well-loved brand in the crossbow industry. They makes both expensive and inexpensive crossbows for everyone. The crossbow we have today is the Archery Raptor Pro STR. It’s Barnett’s inexpensive offering.

Coming at just under $500 and weighing 6.9 lbs. This crossbow is capable of shooting at up to a whopping 400FPS! 400FPS is no joke. It’s the fastest crossbow here on the list so far. With 400 FPS you can easily shoot past 100 yards barrier without any issue.

This is the pipe dream of a hunter and target shooter. With that massive amount of power, you can shoot every target. When it comes to hunters, you can easily hunt deer, elk, and many more.

The crossbow is constructed from fiberglass material. It’s a lightweight and durable material. It’s suitable for crossbows. The trigger system has anti-dry fire safety. The draw weight is on the higher-end. Coming at 187 lbs you can lower by using a rope cocker.

The included 4×32 crossbow scope is quite good. It’s definitely not the best but gets the job done. If you upgrade accessories for the crossbow keep the scope on that upgrade list. 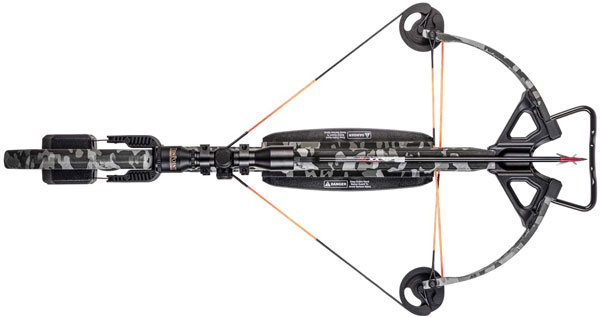 Don’t mix TenPoint with CenterPoint. I tend to do that sometimes haha. Their naming game is always on point.

Wicked Ridge Rampage is a high-speed best crossbow under 600 dollars. As the name suggests, Wicked Ridge is capable of firing at 360 FPS. That’s not a small number by any means. Almost 400 FPS.

With that much speed, you can do both hunting and target shooting.

This is the only budget crossbow that comes with an Acudraw cocking device. Thanks to this built-in cocking device, you can easily cock in the bolts with a mere 5 pounds of force. Even a kid can load that.

The 3x scope is calibrated at 20, 30, 40, and 50 yards. You should calibrate the scope according to your wishes. It’s a good scope. You can use it without upgrading the scope for a year or so.

For $600 I would say you are stealing in daylight with this one. The crossbow is built in America. You won’t have any trouble claiming warranties at all.

Barnett has over 70 years of experience in crossbow making. When you hold one crossbow from Barnett, you can see their effort behind the crossbow.

TS380 is capable of firing bolts at a speed of 380 FPS. That’s a lot more than most $500 crossbows has to offer. The weight of the crossbow is not that high either. Just a little over 6.9 pounds.

If you take the version without the crank device, you will get a rope coker. Using that you can reduce the draw weight by a good margin.

If you have read more than one Barnett TS380 review, then you already know the crank device makes a good amount of difference. That doesn’t mean the one without it is bad. It’s the same crossbow. Build quality and all the other goods remain the same.

The only downside of this crossbow that caught my attention is the scope. It’s not good at all. You can use it, but I highly recommend you to switch to something better as soon as you can. That’s why this is a good deal in my book.

Is spoiling the speed of the crossbow in their name some kind of trend? Maybe not, maybe a marketing gimmick. But we are not here to judge their names rather their crossbow.

I have used Killer Instinct crossbows in the past. I am well aware of their performance. They sure do have a killer instinct to them (you saw that coming).

As the name suggests it can shoot at up to 425 FPS. The highest speed in any of the crossbows mentioned on the list. It’s an excellent crossbow for hunting. No animals can escape a bolt at that speed. Even if they do, the cocking mechanism is not that hard, you can easily reload and shoot before they escape.

But why would you miss it? The scope is quite accurate and visible. It can easily guide you to a shot that most other scopes failed to do. It’s a 5×32 IR-E scope. In my opinion, this is the best scope among the bunch. You don’t need to change anything about the scope.

The crossbow weights at 7.2lbs. Fairly similar to all the other crossbows on the list. It’s an excellent crossbow that offers incredible and unmatched speed. If speed is your main priority, this is the one that you should get. Grab them while they are still in stock.

I have to end our journey here. We hope the boat was able to reach the shore. If you have further questions or suggestions left, don’t forget them to leave them in the comments.