Anatomy Of A Crossbow 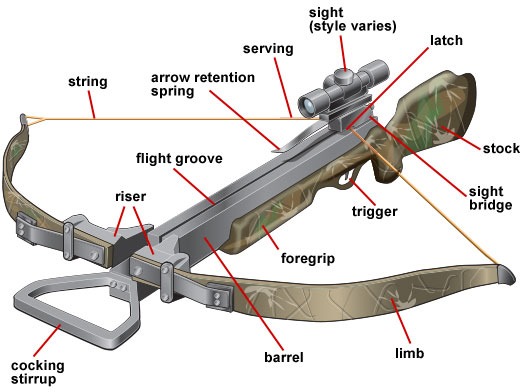 Crossbows are very famous among bowhunters. Its short learning curve and accuracy is one of the main reasons. Operating a crossbow can seem hard but once you get the hang of it you will enjoy it very much.

Stirrup- The First Anatomy Of A Crossbow!

A metal frame which is located in the front of the crossbow. You put your feet inside it while you cock your arrow.

Stock- The Second Anatomy Of A Crossbow!

A lot of rifles also uses different stock for better usage. Sometimes companies allow you to use your own stock. That’s because some people are more comfortable using their previous stocks.

The rear of the stock which rests in your shoulder is called buttstock. Buttstock might be changeable depending on the model of the crossbow.

Limbs- The Third Anatomy Of A Crossbow!

Just like any humans have limbs a crossbow also has limbs. They are not as flexible as your hands but they are flexible. Their job is to flex and store the energy to propel bolt. For example, recurve crossbows have curved limbs. Compound bows have something called cams at the end of the limb.

Bowstring- The Forth Anatomy Of A Crossbow!

Rail- The Fifth Anatomy Of A Crossbow!

Different kinds of bow got different kinds of rails. You guys might be aware of the rails in a rifle. Where you place your scope and other accessories. In a crossbow, there is also a rail sometime 2 rails available.

The main rail where you place your scope and other accessories. Sometimes the company gives a secondary rail near the top end of the scope to attach small accessories. You need to buy a scope that your crossbow rail supports. So always keep that in mind.

Trigger- The Sixth Anatomy Of A Crossbow!

Compound bowstrings are pulled manually and released manually to shoot the arrow. Don’t get me wrong you also need to pull the bowstring of a crossbow to cock the bolt but you don’t need to hold the bowstring while you aim (which you need to do while using a bow).

In that regards the trigger mechanism is far better than manual shooting. It’s almost like you are using a gun. These are the key (parts!) Anatomy of a crossbow. There are other accessories available which people might consider a crucial part of a crossbow. For example, scopes are mandatory to aim with a crossbow.

Whether it’s a red dot or a variable zoom crossbow scope, it’s necessary. You can also say the same for a quiver. But after all, they are accessories. They make the crossbow full true but they don’t make the crossbow.