Spypoint Link Evo. This one is a little different than a regular trail camera. This camera holds it’s ground pretty well. Most of the complaint regarding this camera is related to picture quality not build quality. You can be sure that this is one strong housing. 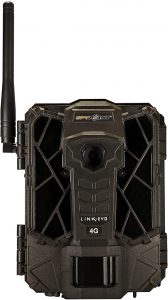 The body of this camera is made out of polymer plastic. You may be wondering why plastic. Plastic is not that bad of a material for a body.

The camera is built strong and can withstand some solid ground. While they are not comparable to the durable aluminum housing.

All the complaints about the camera are here. Even though Spypoint claims they are providing HD images and video (which they are not wrong) but a lot of people complain that their camera takes shitty pictures nowhere near HD.

The included camera is a 12mp one. The sensor is good, I honestly don’t know whether they received faulty items or we received a working one. Because the pictures that we took from the camera is pretty good.

But yes we do agree that the camera misclicks a lot and takes out of context pictures. A lot of pictures also came as unusable. We are not being paid to say this stuff.

While it is true that you will find a lot of negative reviews of the camera in the Amazon comment section but when you read more reviews about the camera by professionals, they claim the camera is not as bad as some people claim it to be.

If it was Spypoint would have stopped making this camera long ago or not give a warranty at all. If your camera is faulty contact them they might replace it if it’s within the warranty period.

The camera has a 12-megapixel shooter that can capture videos and images at HD resolution. The main selling point of this camera is it is wireless and a cellular camera.

Yes, my friend, it supports the Verizon network (we have previously reviewed a verizon network trail camera) and can accept a 4G sim card.

You can control the camera with SPYPOINT LINK APP. Operating the camera is fairly easy and not that hard. As it’s an app-based operating system all you need to know is how to operate the app.

The flash range on this camera is up to 90 ft. The trigger speed is 0.3 seconds. It’s super fast. But then again lot’s of complaints about false triggers. The manufacture even provides a pre-activated sim for you to start using the camera right away.

The camera has 42 LED IR lights. The infrared boost technology allows the camera to take 720p videos and images even at night. All we are going to say is we got satisfying pictures from this.

With all 8AA lithium-ion batteries you can expect a battery life of 3months or somewhere near that. While we agree the battery life is not impressive compared to other trail cameras who gives as long as 10months of battery life.

But you can’t forget that this camera is on 24/7 and is powering a cellular sim to send photos and videos to your phone. If you set the app to send you pictures every day it won’t probably last a month.

That is why you shouldn't set the camera to send a picture often.
Click here to CHECk on Amazon!

To conclude! We want to say is even with all the complaints it’s an option that you should keep in mind if you are looking for a cellular trail camera.