If we are talking about 2005, and you went to buy a crossbow. You asked the shopkeeper to show you a $200 crossbow or $300 Crossbow. He would give you a look that could kill. But here we are, talking about $200 crossbows. How did they manage to pull it off?

What we are going to discuss today is by no means toys. But they can be a great choice for beginners and young people getting into the scene. It won’t leave you completely broke before the holiday. Without further ado, let us start. Let’s get to know some of the best crossbows under $200. 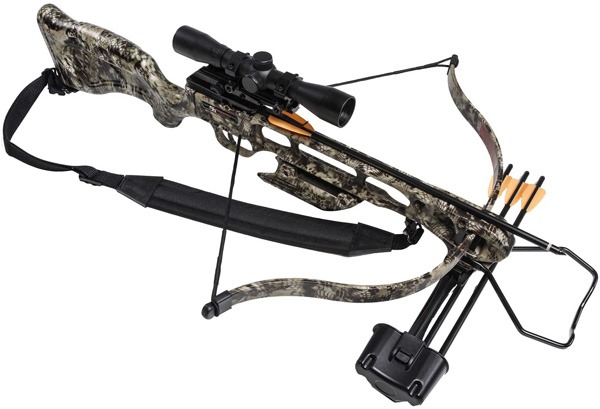 Empire Fever Pro is one of the most budget-friendly beginner crossbow available on the market. SA Sports did a terrific job creating this one. There aren’t any fancy aircraft-grade aluminum or carbon fiber involved. But the build is quite durable and sturdy.

It’s a recurve crossbow. That means the draw weight will be quite high compared to compound crossbows. You can always cut off the draw weight by half with a rope cocker.

Speaking of draw weight, Empire Fever Pro has a 175lbs of draw weight. You can shoot the bolts at 235 FPS with that much of draw weight. That’s not super fast or anything. But fast enough to give you the thrill of hunting. Slowly you can get the hang of the game and invest in a better crossbow in the future.

The track and barrel are made out of aluminum. It should last for several years. The stock design is improved and new. I don’t hate the design, but they could have gone for a softer stock. But hey, it’s less than $200. SA Sports had to cut corners somehow.

Another price cut was in the spotting scope. Just get a better one when you can. It’s 4×32 will do the job. But it’s not that great at all. The only complaint from me will be the scopes. Another nitpicking is, there aren’t any colors to choose from. You have to stick with the stock whether you like it or not. 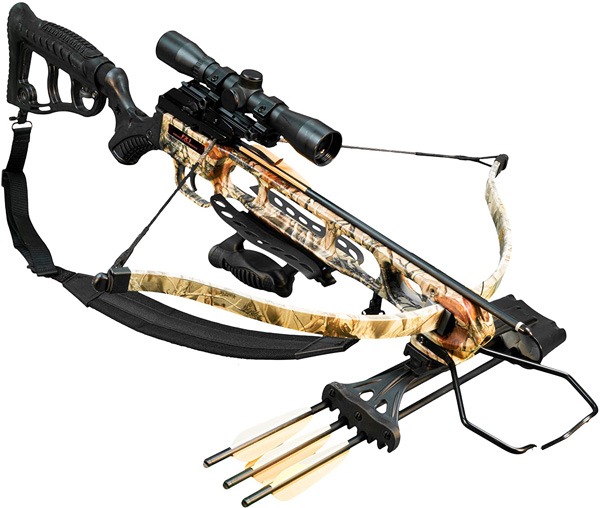 Did Vikings use crossbows in their wars? As far as I know, they used long-bows and regular bows. They were quite good at using them. Vikings here tried to resemble the greatness of that era perhaps?

FX1 is another recurve crossbow on the list. This thing does not look like Vikings at all. It’s a modern crossbow with a camo finish. The stock is black.

The draw weight of this crossbow is 175lbs. You can that off to half by using a rope cocker. With that much draw weight, FX1 is capable of firing bolts at 240 FPS. A bit faster than Empire Fever Pro, but not tremendously fast.

I like it that, the manufacturers are honest with their information. They could easily lure customers by claiming an absurd amount of speed and not delivering that. Also, no I would never deceive you guys like that. I only review the units that I think are good and will be worth it for you guys.

The included 4×32 scope is a bit better than the Empire Fever Pro. It’s not extraordinary. But just enough for your little hunting adventure and learning curve.

Talking about the learning curve, learning to use this crossbow is a piece of cake. You can easily cock the bolt and fire on for days. Be careful, there aren’t any fancy safety precautions involved. Most of the safety will still depend on you. 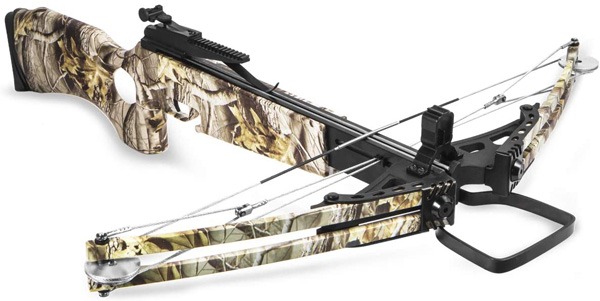 If you guys never saw a modern crossbow before, I can imagine you would think a crossbow looks like this. But most of them do not. XtremepowerUS went for a different approach. And I have to say, I quite like this.

The draw weight is a bit higher than the others here. The draw weight of this crossbow is 180lbs. And guess what? With that 5 lbs extra draw weight (which you can cut by half using rope cocker by the way) you are getting 300 FPS speed.

XtremepowerUS crossbow is the first one on today’s list to hit the 300 FPS mark.

Now, I know they are not that good to hit 300 FPS every hit. But they can easily hit the 280 FPS mark. Which is plenty enough for small hunting and range shooting.

300 FPS is more than enough to provide the thrill to a newbie who never fired a crossbow before. The trigger system is also endowed with an anti-dry fire safety system. All in all, it’s one of the best $200 crossbows you can buy. 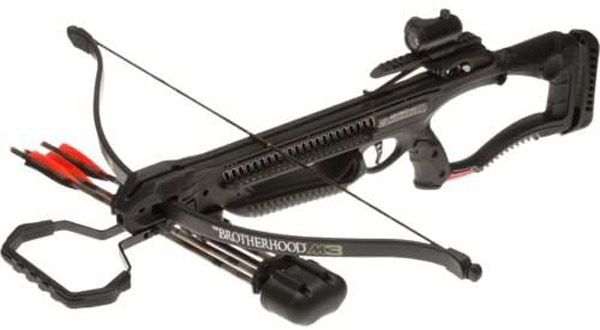 Now, this is a name that we all heard of. In the pond of all new fishes, Barnett is the shark I suppose? Is that a bad metaphor? Let me know. Anyway, let’s not get distracted by fishes.

Barnett The Brotherhood M3 is another recurve crossbow on today’s list. This thing does not look modern by any means. But don’t let the look fool you. This little crossbow is capable of firing at 245 FPS.

The draw weight is also quite lower than the rest of the crossbow so far. Coming at 150lbs draw weight, even a newbie can load the crossbow with ease. You can cut that weight by almost half if you use a rope cocker.

Sadly, Barnett won’t be giving you a rope cocker for free. But they are quite cheap. You can easily get one from your local store. Like all the other crossbows, this one also features an anti-dry fire safety mechanism.

The included scope is straight-up garbage. It’s one of the if not the worst crossbow scope I put my eyes on. Just throw that away in the trash and get a $50 or so crossbow scope. Don’t let this garbage rot your eyes.

Besides my epic rant about the crossbow scope. There weren’t many places that I could nitpick off. Sure the build quality looks like a toy. But it gets the job done. At this price that’s what matters the most. 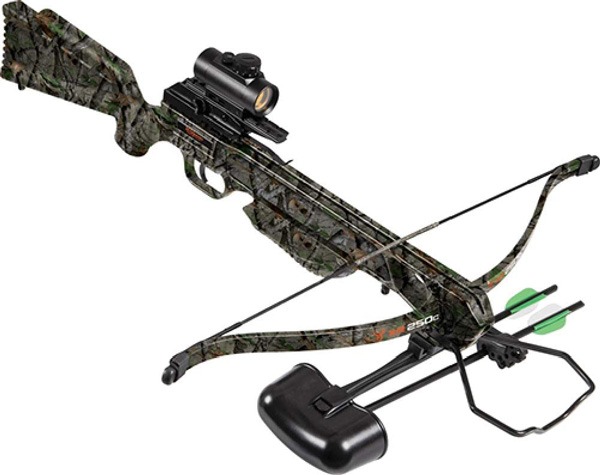 You will get a quiver, 2 18″ arrows, a rope cocking device, and a red dot crossbow sight. The sight is enough for 30 yards or so hunting and target shooting.

I am feeling real corny today, aren’t I. Anyway, this crossbow with 250 FPS is more than capable of doing small hunting and 50 yards shooting. But to take accurate 50 yards and beyond shots, you will need to upgrade the scope first.

With so much money left over, you can easily invest in a scope. Invest in a good crossbow scope, so that you can use that with your future crossbows too.

That concludes. I didn’t want to include too many. There are quite a few options. But I included the ones that I tested and found useful. They are all beginner crossbows. Treat them like that and you can take the game quite far. Don’t compare them with other expensive crossbows and you are good.

Like always, thanks for reading, if you have any questions left drop them down in the comments. Don’t worry the comment section is not fragile, you can drop nukes if you like. Forgive me for my jokes, but I hope you guys enjoyed the read and found this helpful.