Buying a new camera is always a hard task. When it comes down to a cellular camera, the job is even tougher. But don’t you worry about that, because for you guys we got just the right thing.

Don’t worry, This best cellular trail camera guide will help you and we will keep everything minimal and suggest the right trail camera for your budget.

Buying a good trail camera in the budget has never been easy. We are here to change that. 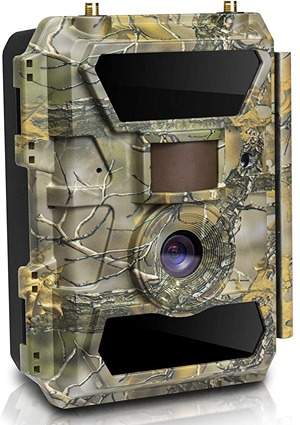 When you are looking for a deer hunting cellular trail camera, the first that comes to my mind is CreativeXP LTE 4G cellular camera.

THE REASON BEHIND THAT IS QUITE SIMPLE.

A lot of cameras either lack in the IR department or just aren’t user friendly and force you to watch the photographs on the small built-in screen or take out the memory card copy it to a computer and then reinstall the memory card.

In due time the process stops being a hassle, but there are lots of people that just want photographs to be delivered directly on their phone from the camera.

That’s where the cellular camera comes in. The CreativeXP LTE 4G takes pictures and sends them to your phone over LTE connection.

The camera also has WiFi, if you want to use that instead LTE you can do that.

CreativeXP also offers a free SIMHERO Card with 500 Free Photos and a 32GB SD card with no string attached. Yeap, you don’t have to purchase their yearly subscription unless you want to.

Their offering is cheap, 8$ for 1500 photos is a steal. They also use widely available AT&T towers.

The camera takes some beautiful photos during the daytime, and the 12mp shooter with 56IR light takes some quality night time photos.

If you have the money, I highly suggest you pull the trigger. You won’t be disappointed. The camera has 90%+ positive feedback on Amazon and got the green light from many other reviewers. 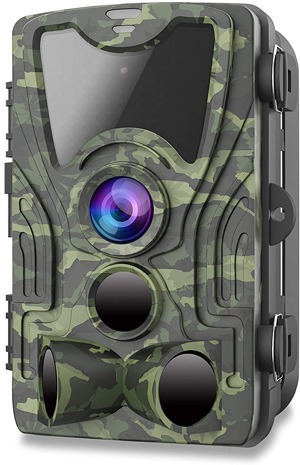 If you are looking for a cellular camera that does a great job but isn’t pricey. Then, my friend, this one should be on your top priority list. It’s not every day you see a sub 100$ cellular camera. But now you have seen one I will give you a couple of reasons to go for it.

While being on the budget side, the camera doesn’t neglect its other features. As the name suggests, the camera is capable of taking 1080p, aka full HD resolution. That’s a huge plus.

On top of that, the camera has an excellent build quality and is rated IP65. That means the camera is fully waterproof. You can leave the camera in the wild for months without any issue.

One of the key selling points for this camera for me was the trigger speed. First of all, it’s a sub 100$ camera; even then, it had less than 1 second of trigger speed.

TO MY SURPRISE, it has a 0.3 seconds trigger speed. If you have researched a little about trail cameras, you know how important fast trigger speed is.

If you are using it as a home security camera, then one millisecond can be the difference between trespasser getting caught and not getting caught. 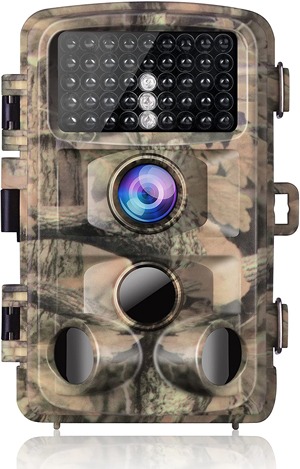 Campark is a well-known brand in the outdoor camera industry. T75 is no different. This outdoor trail camera is excellent for hunting.

WHAT’S SO GOOD ABOUT THIS? Let’s find out in this Campark T45 review.

The Campark T45A is the new 2020 version of T45. With a 16megapixel camera sensor, the trail camera is taking good care of its customer for over two years.

Every year Campark upgrades something of this camera. The Campark T45A has a super infrared night vision to take a crisp picture at low light. The camera uses 42 infrared flashlights to take photos at night.

The T45A also has three passive infrared modes. This way, the camera saves a ton of battery when the IR flashlights are off. Thanks to the excellent sensors. The trigger speed of this camera is also super fast, a mere 0.3 milliseconds.

The camera is excellent for HUNTING and HOUSEKEEPING.

Friendly reminder don’t take off the protective foil from IR flashlights. You may end up scratching the surface. The password reset process of Campark T45A is easy. 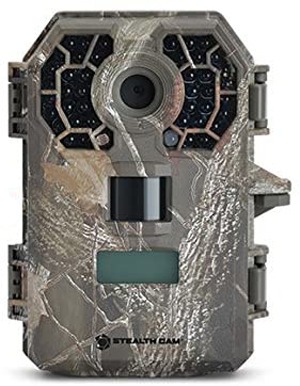 Stealth Cam, the name has a threatening aura if you ask me. Enough about the name, we are here to talk about their camera. The G42NG is mainly a budget-oriented camera.

The other variant has a 24mp camera. Confusing right? Well, don’t be. All of them pack the same interior and features. More megapixel doesn’t mean better pictures. They are no-glow black IR emitters.

The daylight pictures are excellent. Nighttime photos are not as good as day time, but they are usable.

The 100-foot detection range is also generous. The camera also has a rapid-fire mode that can take 1-9 pictures at one go. The trigger speed of the camera is 0.5 seconds. 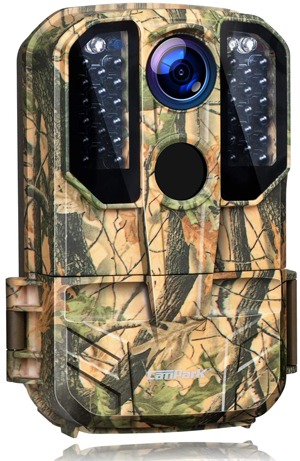 Another camera from Campark. Don’t worry. We are not keeping bad cameras on our list. If it’s on our list, this has to be good.

With a modern feature like WiFi built-in and app support, every hunter is appealing. The WiFi and app control is also suitable for people that use a trail camera to track their home surroundings.

You can connect it to your phone via WiFi and control the camera as you wish. It’s an excellent feature if you ask me.

ON TOP OF THAT, the build quality of the camera is like a tank. The IP66 rating speaks volumes of it. It is an entirely waterproof camera. You don’t have to worry about it if you leave it out in the open for a couple of months.

The camera is capable of recording video @1728×1296,30fps. The camera takes excellent day time photos. The IR flashlight helps it to take good pictures at night too. 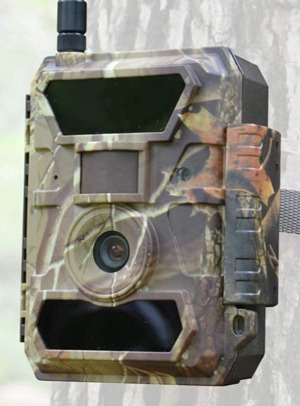 If you are looking for a trail camera with a cellular connection, then you may consider this tiny little camera here.

Even though the name is Bigfoot, the camera is pretty small and compact. But don’t let the size fool you. The camera is very capable of taking good daytime pictures. It has a 1080p camera sensor that can also record videos.

If you use any carrier except AT&T, you can receive pictures directly from the camera via MMS. But AT&T acts a little buggy in old 3G phones. If MMS is a must for you, we suggest you go for the 4G model. Of course, that will be pricey but worth it.

ANYWAY, the camera requires 12 AA batteries to operate. Like all other trail cameras, you need to purchase batteries separately. Bigfoot doesn’t say anything regarding any specific batteries. Get 12 AA batteries from your favorite vendor and call it a day.

FOR NIGHT TIME, using the camera comes with 56 IR lights. They are not like regular flashlights. The camera also has an IP66 waterproof rating. Rest assured, you can leave it out alone in the wild. 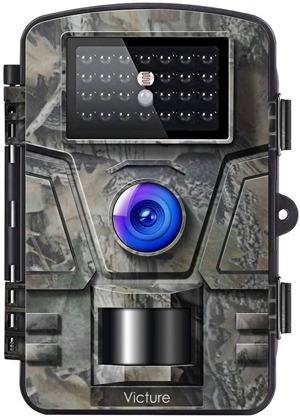 The Victure HC200 is capable of recording videos and capturing photos @1080p resolution.

FRANKLY SPEAKING, 1080p is the new norm in trail cameras. No offense to any brands, but in 2020 if you are not giving the bare minimum (1080P resolution) sensor, then you are doing something wrong.

The camera is a 12megapixel shooter. I am once again mentioning that megapixel doesn’t always represent the photo quality. HC200 is an excellent camera for photo taking.

The camera also comes with a fast 0.5 seconds trigger speed. This seems high, but when you compare it with more expensive cameras, the trigger speed is excellent.

The 940nm no-glow infrared technology helps you to make visible and clear pictures at a dark knight.

The camera also has a 2.4″ LCD. You can set up the camera faster by looking at the screen. You can even look at the images camera took on the field.

WITH THAT ATTRACTIVE PRICE, we can say that this is probably the best trail camera you can buy under 50$. 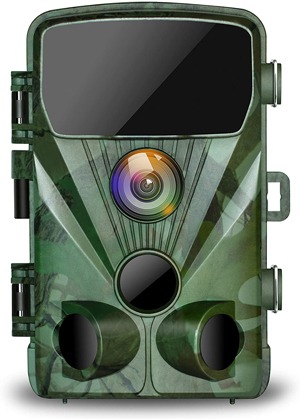 EVEN THOUGH, Toguard H20 looks like a fancy toy with camo skin, it’s a trail camera. A good one too.

The best feature of the camera for me is its size. The size of this camera is 3″ x 4.5,” and it fits in the palm of your hand. If you place the camera correctly, no animal/trespasser will ever find the camera.

It’s so small that you can’t see it from far away. But it sure can record from a FAR WAY.

The maximum distance of the camera is 65 feet, I know it’s not much, but you have to keep in mind that it costs less than your child’s favorite toy.

WITH THE VERSATILE MOUNTING SYSTEM, you can virtually mount it to any tree. If you leave it behind a bush, I am sure no animal will be able to find it. Not that I recommend it by any means. 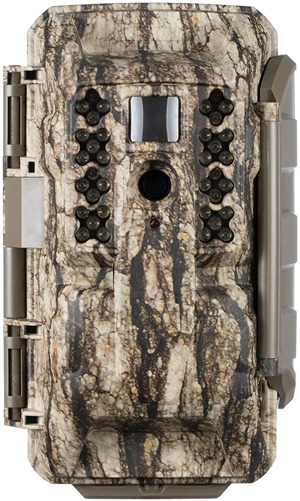 Almost all of the cellular camera on today’s list mainly supports AT&T. If you are a Verizon user, good news for you. The XV700i supports the Verizon network while the XA7000i supports AT&T. They are the same camera but support different carriers.

The price of this camera is slightly on the mid-range side. In my opinion, it earned its pricing. The camera is more than good if you ask me. The 20mp shooter is an excellent sensor. The photo it takes during the day and night time is fantastic.

We are not going to compare it with any 4k DSLR out there, but the 20mp camera acts like a 20mp sensor. Most of the trail cameras just put on a high megapixel shooter but a trashy sensor. It’s not the case here.

The photo quality and video quality is quite amazing. Moultrie camera setup is not a hard task either.

I have to admit the Moultrie mobile app is excellent and easy to use. If you have an active internet connection, you can collect the photos at any time.

Let me ask you, is that camera cellular?

A cellular camera uses an active sim card and internet to send pictures to your phone. You need to charge your smartphone often, don’t you? That’s why three month is more than enough battery life for a cellular camera. 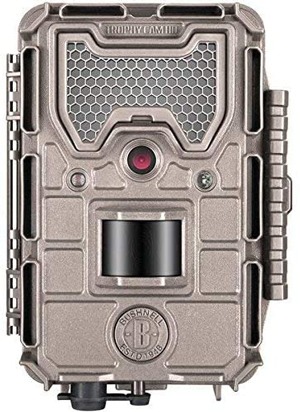 Bushnell is an excellent manufacturer.

Usually, they target the budget-oriented market. That doesn’t mean Bushnell makes bad products. But we are here to talk about their trail camera.

WITH ORIGINAL PRICING, the camera costs just a little under 200$. There are two versions of the Trophy cam available. The base version is a 16-megapixel one, and the upgraded version is 20 megapixels.

While on the exterior, both versions are the same, but there are some differences between them.

While the IR illuminators are not the non-glow version, they are low-glow. You won’t be able to see them with bare eyes. A lot of animals won’t see them either.

Both cameras take 1080p videos and photos. I have to admit the photo quality was somewhat surprising. I was hoping that you will get average images. But Bushnell again exceeded my expectations. Props to you, Bushnell.

And that’s a wrap. That was the last one on our list. We hope you enjoyed this shortlist. I hope that you found something you like. If you have read the post carefully, then you already know which one to buy. If you have any questions or suggestions, please feel free to drop them down below.